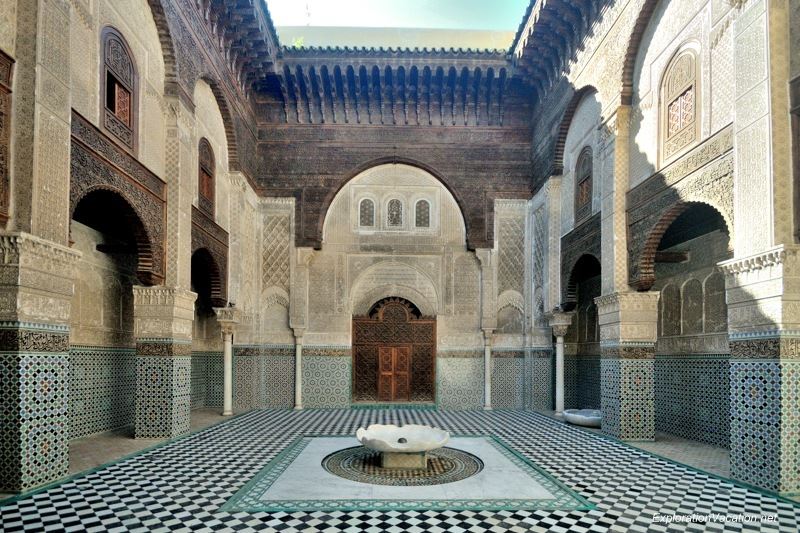 Morocco has a unique location and therefore has been influenced by many cultures throughout time which can be reflected in the architecture. Over the centuries the country had been formed by a mixture of European colonisers, Arabic neighbours and African tribes traveling through the country all these influences have created a rich cultural mix which is unlike any other and is reflected in the countries architecture and the Moroccan people.

In Modern Morocco we can see many different architectural designs but the strongest influence throughout is Islam where the décor and building guidelines have been influenced, followed and have directed the construction and decoration of the buildings in many parts of Morocco for centuries.  Hispano-Moorish architecture (architecture characteristic of North Africa and the Iberian Peninsula) also took roots in Morocco during the Almoravid dynasty. Thus a mixture of these two architectural styles can be detected throughout many of the cities.

The many diverse architectural styles and elements can become somewhat overwhelming; we can take you on a short journey describing the variety of elements.

Morocco a country of mystery and beauty and high allure is in part due to its unique and enchanting architecture. Even though the country experienced a turbulent history luckily most of its artistic heritage has survived with many UNESCO world heritage sites protecting its heritage for the future.

Components of the architecture have strong Islamic influence this can be seen by the elaborate geometric patterns, colourful zellij (a ceramic-tile mosaic) and ornamental Islamic calligraphy of Quranic verses. Many open courtyards holding exquisite gardens are often found at the centre of buildings these were constructed to provide places for privacy and relaxation.

Mosques are like in any Islamic country Morocco’s most important structures. Seen in every city, village, or town you will always find at least one mosque with its minaret tower been seen for miles. The walls and fountains covered in green and white zellij and beautifully adorned mirhab indicating the direction to Mecca in stucco and marble a true indicator of Moroccan architecture. Examples of beautiful Moroccan mosques can be admired on a visit to the spiritual city of Fez in particular the Al-Qarawiyyin Mosque.

Yet another fine example of the beautiful Islamic influenced architecture is madrasah more than just religious schools but was truly prospering centres for the study of law, philosophy, and astrology. Unique architectural designs display a rich contrast with the small simple wooden accommodation rooms for the students to the adorned gate and a large courtyard lined with magnificently decorated arches with detailed art works. The mosque within the school walls would also be exquisitely decorated in sweeping Islamic calligraphy and complex motifs on green and white zellij. The Madrasah Bou Inania in Fez is in our opinion well worth a visit.

The fortified medina part of the city with their impressive size and structure were built in agreement of their surroundings the huge outside walls blending into the background with their tan coloured exterior, the use of simple construction materials allowed for the interiors to remain warm in winter and cool in the hotter months. To see a fine example of a Kasbahs the Kasbah des Udayas in Rabat should be on your list of places to see.

Riads are private residences traditional homes and palaces in Morocco they were built with privacy and seclusion at the forefront of the design focusing  inwards with a courtyard in the centre allowing  for both family privacy and protection from  the Moroccan weather. All the rooms open out onto the courtyard featuring windows towards this space. Courtyards were usually decorated containing orange or lemon trees to allow for their sweet scent and often a fountain in its centre. Wealthy families would also decorate their Riad with impressive zellij and stucco work. In modern Morocco many of the ancient Riads have been renovated and repurposed as hotels and restaurants.

The Saadian Tombs and the Bahia Palace in Marrakesh

Andalous Mosque and the Museum of Moroccan Arts in Fez

The oldest examples of Moroccan architecture tend to be found in the Atlas Mountains often in the ancient kasbahs and old villages. Other places to experience Moroccan architecture are waiting to be discovered by walking down any street and looking at the many grand government buildings with their stately façades or walking through ancient city gates with their remarkable archways.